Leaving it a bit late to get the monthly news update done, but here goes……

May was an incredibly busy month one way and another – quite a few gigs in the diary to co-incide with the launch of the new album ‘Colourblind’ on the 14th.  Circular Records set up a really nice launch evening at the City Halls in Glasgow, with around 60 or 70 people attending, including musicians, songwriters, friends in the Scottish music biz and many more.  The usual Duncan McCrone Trio of me, Cy and Stevie were joined by Chris Stout on fiddle and Finlay Macdonald on whistles for a half hour set of songs from the CD, which seemed to go down quite well.  Now we wait to see if the nice reviews we’ve had in many of the well-known magazines (such as Maverick, Rock’n’Reel and Muso’s Mag) together with the round of radio interviews across the country set up by Bob Buchan PR translate into sales……it’s not easy out there, and realistically it’ll be a case of trying to get as many gigs as possible, as that’s where the sales are most likely.

In the midst of all the mayhem, Cy and I managed to finish off another library music album for a London-based publisher, and De Wolfe Music launched our CD ‘Scottish Roots’, which is a collection of ceilidh and pipe band tunes, aimed at TV, radio and film producers, and if that wasn’t enough, I managed to get together with my old bandmates The Clydesiders to record an album of songs for a Scottish roots-based label, to be released hopefully in late summer, and aimed squarely at the tourist market.  It was incredibly good fun – we hadn’t played together in this line-up for (gulp) 26 years and honestly, it was just like getting back on a bike – the years just fell away.  As a one-off special, we played a 45 minute set at the Fintry Music Festival, and I actually think it sounded better than it did in the 80s…….no plans to repeat the experience, but..never say never!

June started with a gig for me and Cy at the Kintyre Songwriters Festival in Campbeltown, which was one of the most inspiring evenings I can remember in a long, long time.  The musos, singers and writers down there support each other to an incredible degree – not an atom of competitiveness, just everyone wanting everyone else to do well, and huge support over the three nights from the local community.  I’ve read a lot of dreadful negative stories about Campbeltown in recent months, but all I saw was a vibrant crowd of people proud of the beautiful place they live in, and determined to put it on the musical map.  Kintyre’s one of my favourite places in the World, and we’re heading down there again on holiday in late July – can’t wait.

Back from Kintyre and down to London for a two-day work trip, which was actually really enjoyable – I work with genuinely nice, friendly people at MCPS and PRS, and the big Metropolis is always very atmospheric in early summer, so all good stuff.

After months of deliberation, I decided to take the plunge and buy a new guitar – I took delivery of an absolutely stunning Gibson J200 in antique natural .  Maple back and sides, and a stunning sound.  Some issues with the onboard electrics as I write this, but Guitar Guitar in Glasgow have been great so far.  Nice people to deal with.

Unsurprisingly, I was getting a bit knackered after all the fun and games, so Irene and I took ourselves off for a week in Puerto Pollensa, in Northern Majorca.  Lovely, sunny weather and very relaxing – except for  being royally ripped-off by the car hire company.  A new trick is to charge you a non-negotiable fee for a tank of fuel – some £90 for a Ford Focus, which would fill for about £60 in Scotland (where diesel’s a lot more expensive!), telling you to bring it back empty…try that in a 7 day holiday on an island when it’s enough to go 850 kilometres.  We brought it back over half-full and – you guessed it – no refund..they just top it up and charge another sucker £90.  oh, and they hit you for another £40 to insure glass, tyres, key etc.  If you’re going abroad and renting a car this summer, watch out!

Back in time to play at my local gig in Gartmore Village Hall, the last concert before the hall shuts for refurbishment.  This was the big set up – we call it the ‘Tron Band’ as it was originally set up to record my first live album ‘Just a Glasgow Boy’ at Glasgow’s Tron Theatre in 2001.  Me, Cy, Stevie, Chris, Finlay and Ray Laidlaw on drums.  A packed house, and the boys played their hearts out – it was a magical evening.

So, that’s it for the time being.  Things are quietening down over the summer, and I’m looking forward to getting some decent walk with Duggie the Dug around the Trossachs hills where I live, and some trips away in the campervan and in my old 60s MG, if weather permits.

Have a great summer – catch you again soon! 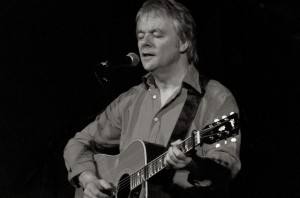