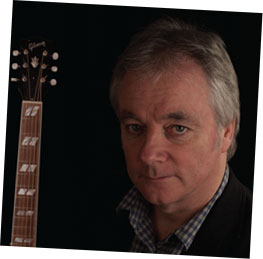 BORN in Glasgow, part of the ‘Baby Boomer’ generation, Duncan knew from a very early age that music would dominate his life. It started with the ‘official’ Tommy Steele guitar (in reality an untuneable plastic ukelele!), moving on to a proper Spanish guitar four years later and all the hours listening to 45s and watching bands on black and white TV.

As with many aspiring pop stars, there was a number of pretty dire attempts at starting bands and playing at local concerts, until he joined his first serious group, replacing a departing guitarist in the folk band Hot Toddy, with Billy Ross (who went on to front the internationally renowned Celtic band Ossian) and his great pal Cy Jack, who writes and plays with him to this day. Hot Toddy grew into the successful 70s folk-rock band Dapplegrim and it seemed Duncan was destined to follow his dream and make a full-time living from music. He worked in various jobs to pay the bills, but was never interested in pursuing a career outside music.

The folk-rock years were to be short-lived, though, and the Celtic revival was under way. Duncan remained at heart a traditional musician and singer, but the rock’n’roll years of his childhood and his love of good country music – Hank Williams, Gram Parsons, Willie Nelson and the like – kept him a bit apart from the real dedicated folk scene. He played in a number of covers bands and worked at his embryonic song writing career until what he laughingly refers to as his ‘big break’ in 1980, when he signed to small Glasgow indie label Pulsar, who released his first single, Teach Me How To Dance, a ballad written by a friend of his, and produced by Cy. It sold in its dozens (well, a couple of dozen) and the follow-up, a disco version of Rhythm of the Rain didn’t make it out of the studio. He recorded these under the name Duncan Aran, which at the time was considered more rock’n’roll than McCrone. Well, maybe just a bit…

Next milestone was his first song writing credit, in 1982, when the big-selling Scottish singer Valerie Dunbar released a single of Always Argyll, written by Duncan and a friend, Jimmy Jamieson from Tighnabruaich, Argyll. He remembers getting a royalty cheque for over £500 from his publisher a year later –  equivalent to three months’ wages! The song went on to be covered by over thirty artists in Scotland, Ireland and Australia.

One of the artists who covered the song was popular folk band The Clydesiders, and when their guitarist decided to call it a day in 1982, Duncan stepped in, beginning an eighteen-year career with the band, during which he recorded seven albums and several singles with them, and appeared in countless concerts and TV programmes around the UK and Europe. The group finally called it quits in 2000, but remain friends and got back together briefly for some radio and recording work in 2012.

Composing and songwriting became the focus of Duncan’s career at this point, and Cy and he were much in demand as writers and producers of music for film and television. Their production company, Ranza Music, went from strength to strength, and they wrote and produced over ten albums for several of the UK’s top production music publishers, including Music House, De Wolfe, Carlin, Boosey & Hawkes and RSM, as well as undertaking commissions to write soundtracks for a variety of TV programmes on BBC Scotland and STV.

A number of artists picked up on their songs, including Irish stars Foster & Allen and Dominic Kirwan, who had a hit single with the Duncan & Cy ballad Absent Friends. They also bought one of Scotland’s oldest-established music publishing companies, Jammy Music, and for a while it looked as though Duncan would be devoting the future to songwriting.

The need to play and sing burned just as fiercely within him, though, and in 2001 he accepted an offer from a small Glasgow independent label to record his first solo album ‘Just a Glasgow Boy’ .. This was a mix of studio tracks and songs from his live show, and attracted a great deal of radio play and press coverage. Duncan was joined on the album by several of his best mates,a philosophy he still adheres to – no strangers on any of his recordings! The line-up was Dapplegrim sidekick Billy Ross, ex-Clydesider and now World classfiddler Chris Stout, multi-instrumentalist Stevie Lawrence, guitarist Jim Yule, Lindisfarne drummer and founder-member Ray Laidlaw and of course his old pal and writing partner Cy Jack on bass and keyboards. Before long, Duncan and the Tron Band (as they became known, following the concert at Glasgow’s Tron Theatre which was recorded for the album) were out on the road working. Highlights were support slots with Donnie Munro, Martin Carthy and Midge Ure and a magical duet at Glasgow’s Atheneum Theatre with Duncan and legendary Pogues frontman Shane McGowan sharing vocals on ‘Loch Lomond’ at a tribute concert for the great Scottish singer-songwriter Matt McGinn, an experience Duncan will never forget!

In 2005, Duncan signed to fast-rising Edinburgh-based label The Music Kitchen, and the result is ‘All You Need to Know’ which brings many of the musicians from ‘Glasgow Boy’ together with the wonderful Scottish harp virtuoso Catriona McKay and legendary Glasgow-based blues harp player Fraser Speirs to create a marvellous collection of original songs, traditional ballads and covers, recorded in TMK’s Edinburgh studios by the renowned engineer and producer Stuart Wood.

As always, the songs reflected things, people and issues that matter to Duncan, from nostalgic thoughts of old cars to ballads of mid-life crises, homesickness and growing-up kids, to the stunningly simple last track, featuring just Duncan and his guitar in a tribute to his boyhood hero, speed king Donald Campbell. The songs are never sad – when he gets close to this, he has a knack of pulling back from the abyss with a humorous or witty observation.

2012 saw the launch of the third album ‘Colourblind’ which was recorded by Duncan and Cy in Glasgow’s Castle of Doom Studios and licensed to Edinburgh’s Circular Records. This was the biggest-budget album to date, and attracted far more press and airplay than before, and gigs began to grow in frequency and size and the live set became more confident and engaging, with the brilliant former New Celeste lead guitarist Jim Yule adding an exciting new dynamic. The band topped the bill at many of the most prestigious folk venues in Scotland, with a highlight being a headliner in 2014 at the legendary Barrowlands in Glasgow as part of the East End Festival.

Fast-forward to 2018, and Duncan was made an offer by the legendary Ian Green, head of Scotland’s biggest folk record label Greentrax Recordings, to record a new CD. It was an ambition fulfilled for Duncan, who had long dreamed of joining the label’s illustrious roster of artists, which included Shooglenifty, The MacCalmans, Barbara Dickson, Fiddler’s Bid and Paul McKenna, among many others. Ian offered a much larger budget than Duncan and Cy had ever had before, so they brought together the studio ‘Tron Band’ of Chris Stout, Catriona McKay, Sandy Brechin, Jim Yule, Stevie Lawrence, Finlay Macdonald, Fraser Speirs and Ray Laidlaw with guest vocals from iconic singer-songwriter Rab Noakes and the amazing Gaelic songstress Kathleen Macinnes. The new album was recorded, mixed and mastered at the famous Lanarkshire-based Chem 19 Studios by the incredible award-winning producer and sound engineer Paul Savage, and the result is by far the best album yet.